The above mentioned project consisted of demolishing an existing stone block work façade wall of which had started to burst out on itself rendering it as structurally unstable.

Upon demolishing of the existing stone wall, of which the stones were to be set aside for re-use at a later stage, excavation was also carried out so that a retaining wall could be constructed within/ under the existing walkway as part of the solution to repair the damaged section of wall.

The section of wall to have a new proposed retaining wall constructed behind it was 6m linear length. 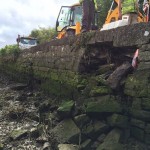 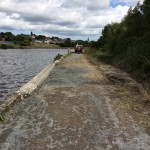